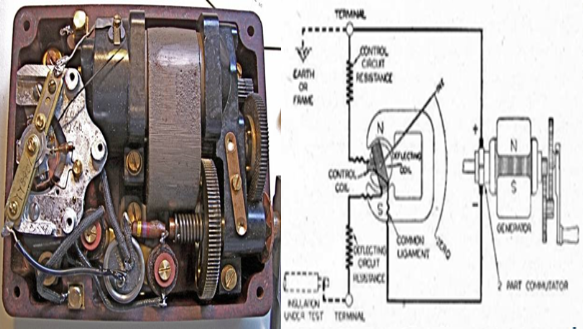 This is my undergraduate assignment in the Electrical Measurement course where the task is to write an essay on Megger or Mega Ohm Meter. This assignment has never been published anywhere and I, as the author and copyright holder, license this assignment customized CC-BY-SA where anyone can share, copy, republish, and sell on condition to state my name as the author and notify that the original and open version available here.

Maybe you've heard an electrician perform a "Megger". The term "megger" is defined as a measurement or test of electrical insulation. Whereas Megger is a company that provides measuring devices in the field of electricity which is well known in the field of electrical insulation measurements. According to the author, the term someone doing "Megger" is a misnomer. Megger is not a verb, which should not be included in the dictionary.

The contents of this chapter are the same as the previous assignments regarding AVO Meters, except:

Materials that are difficult to conduct electric current are called electric insulators. Examples of electrical insulators that are widely known to people are polymer materials, for example rubber. Some say strong electrical insulators are dielectrics. True, the dielectric is a material that can polarize (break up the combined charges). There is another sense that an electrical insulator is one where there is no electricity. The causes of this material being an insulator, among others, the absence of space or the fullness of the atomic nucleus against the electrons, so that the electrons cannot enter, the range of one atom to another is too wide, so that the electrons are difficult to flow (requires large energy), and there may still be other reasons for this. You can study the properties of atoms in chemistry.

Why do scientists need to develop electrical insulating materials? The most basic is the safety factor. Touching electricity with a voltage higher than 60V can jeopardize safety. This can happen intentionally or accidentally. Therefore, the copper cable in every house to carry the electric current must be covered with a polymer material, usually rubber so that it is not dangerous. In ancient times paper and textiles were used instead of rubber. Refrigerator, TV, Computer, Laptop, Mouse, Keyboard, Rise Cooker, light button, Telephone, Hand Phone, Charger and all electronic items we hold use electrical insulation so that we can touch, otherwise we will be electrocuted. The keyboard buttons on our computers use insulation in the form of mica, now it has switched to rubber.

Electrical insulation problems are a major cause of fires. If the two wires on the power pole touch, a short circuit can occur because the voltage is too large, after which it can cause fires and other harmful things. Therefore they must be isolated.

3.1 What and how is the insulation tested or why do many people often call it the Megger test?

The megger test in question is a test using a megometer (mega ohm meter). This test is a test of insulation (electrical insulation) of an object. The tool that is often used is the tool owned by the Megger company, that's why people often mention Megger Test. This test is done by applying tension to an object. The test will be seen by looking for the leakage current. We recommend that you use low voltage first to be careful, so as not to damage the material. If the applied voltage is higher than the object can accept, its insulation properties can be damaged.

To test the smoothness of the electrical fault in a conductor:

3.2 How is the history of the founding of Megger?

3.4 How is the Megger company today?

Megger's products have been used all over the world. Products have been uploaded to the web www.megger.com and are constantly growing. Not only providing products but also providing training in the field of electricity, especially electrical measurement, providing manuals/books on how to measure electricity and others. Megger production is now in Dallas, Texas; Valley Forge, Pennsylvania and Dover, England. Offices have spread all over the world, in the U.S, Cananda, Mexico City, Mexico; Dover, England; Paris, France; Mumbai, India, and Bahrain. There are hundreds of sellers/distributors of products, manuals in multiple languages, software with multilingual displays and Megger workers who can work with consumers around the world.

3.5 Are current Megger devices still only within the limits of electrical insulation measurements?

Electrical insulation measurements really need to be known by every electrician. Megger (Megaohm Meter) is a tool that is often used. Megger has now grown into a company that offers a wide variety of electrical measuring instruments.